Volkswagen has an orchestra which plays works by murdered composers

Remarkable that an icon of Nazi industry should have staged a Holocaust memorial ceremony this week (report here).

Musicians from the Philharmonic Volkswagen Orchestra then performed the Third String Quartet by Jewish composer Viktor Ullmann (1898-1944), who was murdered at Auschwitz-Birkenau. The piece was written in the Theresienstadt ghetto in 1943, and was first performed at the Volkswagen plant in Wolfsburg. 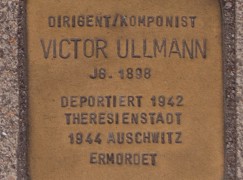 Volkswagen has a phiharmonic orchestra which performs works by murdered composers…