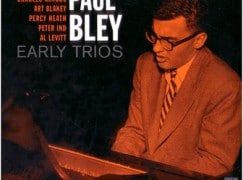 He played with Charlie Parker and Charles Mingus, forming the Jazz Composers Guild that fuelled the so-called jazz revolution in 1960s New York. He was briefly married to Carla Bley, who kept his name.

Paul Bley, renowned jazz pianist, died January 3, 2016 at home with his family. Born November 10, 1932 in Montreal, QC, he began music studies at the age of five. At 13, he formed the “Buzzy Bley Band.” At 17, he took over for Oscar Peterson at the Alberta Lounge, invited Charlie Parker to play at the Montreal Jazz Workshop, which he co-founded, made a film with Stan Kenton and then headed to NYC to attend Julliard.

He is survived by his wife of forty three years, Carol Goss, their daughters, Vanessa Bley and Angelica Palmer, grandchildren Felix and Zoletta Palmer, as well as daughter, Solo Peacock. Private memorial services will be held in Stuart, FL, Cherry Valley, NY and wherever you play a Paul Bley record.