Memoir: End of a world as Pierre Boulez departs

In 1945 he declared ‘Stravinsky is dead’. Six years later he pronounced ‘Schoenberg is dead’.

Pierre Boulez, who died yesterday, was a post-war musical revolutionary, determined to slam the door on the past. And that included the radical and modernist composers who were his greatest influences.

He told me in the late 1980s: ‘The history of music proceeds from Bach, through Haydn, Beethoven, Wagner, Mahler, and then via Schoenberg and Webern to Stockhausen and me. All else is irrelevant.’ His certainty was unshakeable, his arrogance almost humble.

He dismissed Mozart as ‘trivial’, Shostakovich as ‘reactionary’.

When he finally became chief conductor of the BBC Symphony Orchestra (1971-75) and the New York Philharmonic (1971-77) it was, he told me, an act of political entryism: ‘You cannot always stand outside, barking like a dog.’

His revolutionary zeal, however, was tempered with immense personal charm, great humour and an insatiable love of musical gossip. Rehearsal breaks with orchestras would turn into veritable gab-fests. Even the composers whose career he blighted – men like Dutilleux and Ohana – were susceptible to his warmth and grace.

Pierre Boulez was born on March 26, 1925 at Montbrison in the Loire and returned there often for refreshment. He moved to Baden-Baden in the 1960s with a lifelong partner, whom he sometimes referred to as his valet, and it was there that he died. In the 1950s, he led the revolution with Stockhausen from a summer base in Darmstadt.

A serial composer, he became aware of the possibilities of electronic and digital manipulation in the 1970s and founded a Paris research institute for composers, IRCAM. But he came too late to the party to benefit from advanced technology. The last third of his life was – like that of Sibelius (whom he abhorred) – creatively barren.

The major works by which he will be remembered are mostly orchestral: Le Marteau sans maitre, Pli selon Pli, Rituel (pour Maderna) and Répons. Many of his works exists in several, obsessively revised versions.

He had long relationships with the Cleveland Orchestra, the Chicago Symphony, the Lucerne Festival and the London Symphony Orchestra.

Pierre was the Prince of Modernism, the last of his kind. A world dies with him.

He was, among other things, such fun. 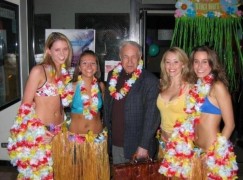