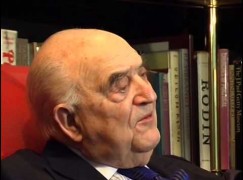 Last of the grand publishers has died

We are saddened to learn of the death of George Weidenfeld, publisher on a grand scale and passionate music follower who wined and dined many of the great musicians. George, who died last night, was 96.

We send love and sympathy to Annabelle, his widow.

A Hitler refugee from Vienna, George worked for the BBC during the War, then for a year with the first president of Israel, Chaim Weitzman, while founding one of the most internationalist of British publishing houses. He published, among others, the Pope, Hitler’s architect, Harold Wilson, Isaiah Berlin and ‘Lolita’.

His multifarious social life embraced such eminences as Daniel Barenboim, Menahem Pressler and Daniil Trifonov. He was a helpful bard member of English National Opera during one of its better eras.

His last initiative was to raise funds for refugee Syrian Christians.

He and I never worked together but we sometimes dined, always a pleasure.

‘We were helpless’: Maestro comes clean on church child abuse »