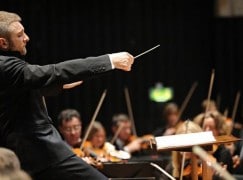 Just in: Russia’s national orchestra to tour US – with Ukrainian conductor

Pletnev will yield the baton on the second half of the tour to Kirill Karabits, a loyal Ukrainian national who has returned to Kiev to perform on Independence Day.

Looks like there’s some delicate cultural diplomacy going on.

The RNO on Kremlin duty: