January 27, the anniversary of the Red Army’s liberation of the Auschwitz death camp, is widely commemorated as Holocaust Memorial Day, a moment to remember the victims of Hitler’s regime.

In Iran it is the occasion of the annual Holocaust Cartoon Contest, under the patronage of the nation’s ‘moderate’ president, Hassan Rouhani.

Let’s remember for a moment who we’re dealing with in Teheran. 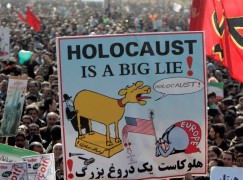