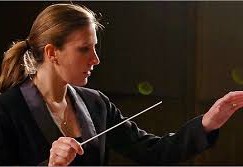 ‘In Russia, people openly tell me that women should not be conductors’

Some thoughts from Lidiya Yankovskaya, a conductor who now lives in New York. Lydia was one of six residents of the  Institute for Women Conductors at the Dallas Opera.

In Russia, the music education and general culture of music appreciation is fantastic. Since the fall of communism, many things have gotten better for women and other things not so much. In the 1980’s there were more female doctors, engineers, and scientists than men. There were many women in positions of leadership, which is not currently case. When I go to Russia now, people openly tell me that women should not be conductors. How men see women intellectually is one thing, but when it then comes to something physical, like conducting, that’s when you really start to see the sexism come out.