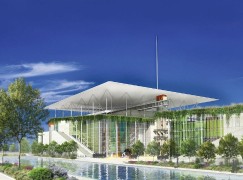 Amid an economic paralysis, work continues on the Stavros Niarchos Foundation Cultural Centre in Athens, which will include a Renzo Piano opera house budgeted at half a billion pounds sterling.

The late Mr Niarchos is paying the builders.

The indisputable champion of the ongoing projects is the Stavros Niarchos Foundation Cultural Center (SNFCC) at Neo Faliro on Athens’s southern coast. The completion of the so-called canopy, an elegant cover soaring above what is soon to be the new premises of the National Library and Greek National Opera, signals the start of the countdown to mid-2016, when the biggest urban revamp in Athens’s modern history is due to be completed. For architect Renzo Piano, who is making his Athenian debut with this project, the symbolic and technical significance of the canopy was huge. The innovative use of ferrocement (consisting of layers of wire mesh and cement mortar) also signals a major technical achievement on an international level. The canopy stands on 30 columns and will be covered with photovoltaic solar panels.

« Semyon Bychkov: What a conductor does

Is Italy the new maestro source? »