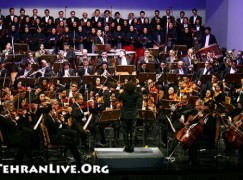 We reported in recent weeks that the orchestra had been pulled from a stadium by its music director after being told that women could not play, and suspended again when the players wages were not paid.

We hear today from Ali Alexander Rahbari that he has just conducted the orchestra, with women, in the stadium from which they were previously banned. And that everyone has now received 70 percent of their back pay.

A small step for humankind.

The Tehran Symphony will soon go to China. Next year it has been booked to open a Bruckner festival in Austria.

« ‘We need somebody as dedicated as Slava was’