The Ernst von Siemens prize for 2016 was awarded today to Per Norgard, 83. 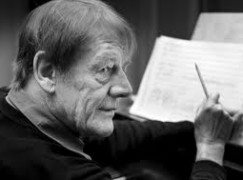