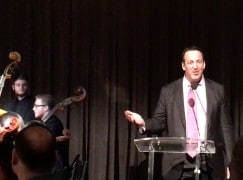 City Opera is back. So?

Former New York City Opera board member Roy Niederhoffer has won his court battle to be allowed to revive the enterprise after paying its creditors just under $1 million to buy their consent. City Opera (est. 1943) went belly-up in October 2013 after a prolonged comedy of woeful mismanagement.

Niederhoffer, a hedge-fund manager, aims to reopen with a Tosca at Lincoln Center in January.

You can see the way his mind ticks: first pack ’em in with a proven hit, then rebuild a People’s Opera.

But Tosca? One of the five most performed operas of all time.

Why should people support the return of City Opera when all it’s performing is the same as everyone else?

These are serious questions. Mr Niederhoffer is invited to answer them here.

« Just in: Agent pleads not guilty to murdering pianist