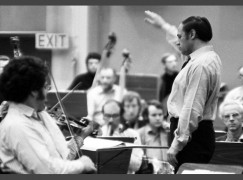 Boulez, yelled the timp, that was Abraca-f***ing-tastic 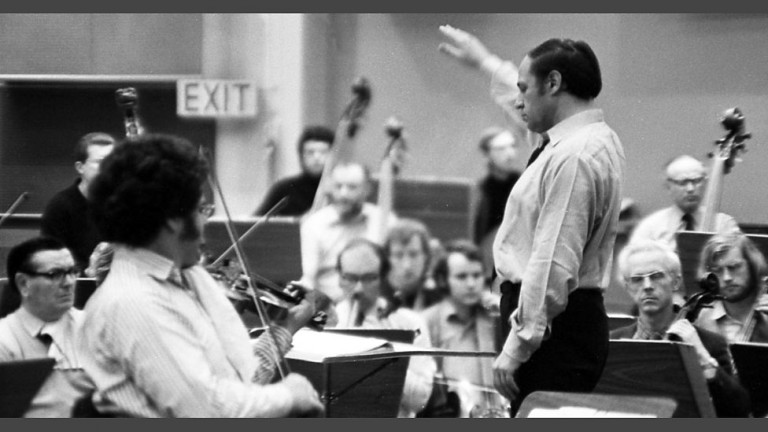 Many years ago, a somewhat posturing editorial appeared in one of the London papers – `Do we really need Pierre Boulez?´ it asked. The response, one imagines, was supposed to reflect England´s early 90s deep-felt and somewhat fashionable wincing in the face of intellectuals, especially those with the gall to talk unflinchingly about elitism and quality. These were the days when cultural political correctness had begun to infest our language with terminology bland as blancmange, and Arts Councils were suggesting that words like talent or gifted were indelicate, nay, dangerous. Boulez, the writer perhaps intended us to cry, was a past sell-by date pedlar of nit-picking musical efficiency with no relevance to 21st century new-age cool or to our retro-reinvented love of goopy instantly emotional tonalism. He wasn´t fun or fast, and worst of all, he was French.

Having the privilege of a Scottish newspaper byline at the time, I responded with red-faced fury. Boulez, I argued, was beyond a game-changer, a musician who had emphatically and indelibly shifted the way we perceive art, a person beyond being merely an influence: an absolute icon of quality and precision and musical excellence whose intellegence, wisdom and passion set down a critical marker in the evolution of European culture.

As a very young violinist in his London orchestra, the BBC Symphony, I had coincided with the final years of his parallel leadership of the New York Philharmonic. I was terrified. He would rehearse Ravel and Debussy desk by desk, hands twitching metronomically, eyes flinty. My desk partner, a very elderly Scot of supreme elegance who had played chamber music in his youth with Heifitz, would whisper ’try a third finger on that top F’ as my damp fingers skidded and skittered. Later, Boulez would summon the whole orchestra and the miracle emerged – long evocative lines which floated and swerved over the immaculate rhythmic scaffolding which his fastidious preparation had created. He made us understand, absolutely, that music is devoid of fluidity – cannot build tension and then let go, cannot sweep and fly – without the discipline of structure.

He had, in the orchestra, huge fans but also grumpy detractors – a noisy ongoing war snarled with the principal trumpet, but he and the eccentric flamboyant Polish principal trombone adored each other – ’Ah Pierre’ Alfred used to splutter tearfully ’true Europe gentleman’. The horn section at the time was spectacular but irracible, tending to erupt at inappropriate times into arrangements of Souza marches if days of Globokar, Maderna or Boulez´s own Explosante Fixe dragged into weeks. Boulez, less than fresh off an overnight flight from New York and a fierce programme of Ligeti would roll his eyes and mutter ’Please, I am in my ninth hour’.

The BBC percussion section was notorious – brilliant as benefitted an orchestra so edgy in its embracing of new work – and full of frightening wit. Rehearsing Bartok, Boulez asked for ’pozzibly…. maybe … a little more magic’ from the timpani at bar 76. We began again. At 76 the drumroll started. ‘Abraca-f***ing-tastic!’ shouted the player.

The tuba player, doomed by history to spend long swathes of time with little to play, was usually immersed in Salinger short stories. At an important concert, he emerged from Franny and Zoe, panicked and came in loudly. And wrong. Abject with apology, he knocked on the conductor´s door at the interval. Boulez appeared clutching a box of Fauchon truffles. ’Never mind’ he said ’have a chocolate…’

Years later I interviewed him before an Edinburgh Festival visit with his Ensemble Intercontemporain. He talked about rhythms in Scottish folk music and mused about scoring in Stravinsky. I asked him why he no longer rigorously conducted the solo bassoon at the opening of Rite of Spring – was it that basson playing was better, or that he had truly relaxed? He giggled and said ’both’.

At his 75th birthday concert he was interviewed on stage, talking with his customary Gallic-inflected fluency. It was hard to reconcile this serene, superb mind with the stormy young dementor of establishments so often described from his 40s – though he smiled about those years without apology. He was asked why he never conducted overtly political music, given his polemnic views – Shostakovich, for example. He replied ’because Shostakovich is a second-rate composer’. The audience squirmed. ’Don´t mistake me’ he said. ’He is an excellent composer, but the evolution of music would not have been altered had he not lived. If we had not experienced Berg and Schoenberg, then our world would be different’.

Only time will tell how badly we have needed Boulez, both his fevered and rebellious youth and his profoundly wise maturity. Maestro, composer, iconoclast, thinker, futurist, friend. Thank you for it all.