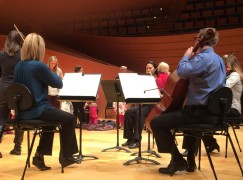 We have received a complaint (below) from a concertgoer who was thrown out of a dress rehearsal Symphony Hall together with her quiet, 20 month-old child. Although the rules prohibit under-4s in the hall, Adele Ohki – herself the child of professional musicians – insists her baby would not have made a murmur.

Along similar lines, this morning, La Scala Milan announced a Sunday afternoon concerts for bambini at one Euro a ticket, and the Kansas City Symphony is actually bringing babies onto its stage (read here and pictured below).

So, before you read Adele’s distressing story from Boston, let’s just see where we stand. Are small children a concert nuisance or a glowing opportunity? Should we stick to the no babes under 4 rule? Are we turning off the future? Think about it… 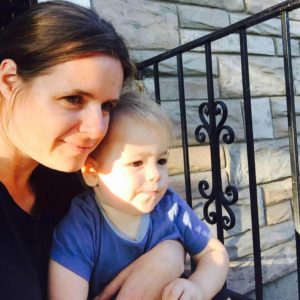 I wanted to bring to attention a post I recently made on my own private Facebook page, regarding an incident that just happened on Thursday at the Boston Symphony. I’d like to bring to the attention of the public the discriminatory and exclusionary practice they have of denying entry to patrons with young children. I was denied entry to a dress rehearsal, and meanwhile, musicians and administrative staff are constantly talking about how they are trying to increase attendance at orchestra concerts and inspire the next generation of musicians. Just this week, Boston Symphony announced that they would offer “casual Friday’s”, where they would invite the public to come dressed in casual clothes, and follow the score on an iPad. I think this is a topic that should be heard by the public, and discussed in a public forum, otherwise the policy will never change. Although the Boston Symphony do offer 2-3 concerts a year that are open to families, these concerts are not with the full symphony orchestra, and are not very frequent, and do not feature the same soloists or personnel as the regular programming. As I am a violinist and freelancer myself, I know many of the musicians in the orchestra and in the Boston area, and I have received a lot of attention and feedback about my original Facebook post, with many people urging me to go public, and share my concerns.

The original post I wrote is below: “I can now add to my list of life accomplishments the privileged position of having been KICKED OUT of Symphony Hall. For Xmas this year, my husband bought my 20 month old son and I tickets to a DRESS rehearsal, not a performance, of the Boston Symphony, at 10am this morning. So, we duly showed up to the symphony, and were allowed in the door. Our tickets were swiped, and when we went to take our seats, we were confronted by the head usher, who told us we were not allowed inside, and must remain outside in the hall. I explained that we were just going to be sitting in the balcony, and were only going to listen to the Moldau anyway, and then leave. My son was in a fine mood, and was behaving in an exemplary fashion. He wasn’t crying, or making a fuss. The people making the huge fuss were the ushers. They told me I could sit in the cafe and watch on the monitor, where the ushers and cafe staff were bashing around dishes and talking on their wallow-talkies loudly. I was made to feel HUMILIATED and discriminated against. I was given uncomfortable stares by the patrons, and at no point was I given an apology. When the rehearsal started, I decided, what the hell, why not just sneak in the door while the ushers aren’t looking? They were being completely unreasonable anyway. As a daughter to two professional violinists, I don’t know how many times I did that when I was a kid and my parents were playing. But gone are the days you can do that without being noticed. I was then yelled at, while the door was open to the performance, and physically removed from the balcony…with VALID tickets. In front of my little one, who was still silent and engrossed and fascinated in the music. SHAME on Boston Symphony. I thought we were trying to encourage the upcoming generations to appreciate classical music? Whatever happened to that concept?!

UPDATE: A positive response from the Boston Symphony here.