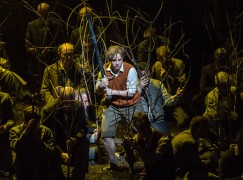 Are opera directors the new divas?

Elisabeth Braw has an original take on the shift of power backstage at the opera houses.

These tensions are not surprising. Conductors often want to remain true to the composers’ work, whilst stage directors want to distinguish their productions from those of competitors. Popular operas are produced by multiple houses—“La Traviata”, for example, was performed 749 times during the 2013/2014 season—and so directors feel compelled to add unorthodox elements. Damiano Michieletto, an Italian stage director, was hit by heavy criticism after inserting a graphic rape scene into Verdi’s “Guillaume Tell” at the Royal Opera House in London.

What is to be done about opera’s new divas?…

« Just in: BBC dumps another controller

How to join your local subharmonic »