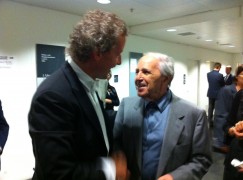 In later years, Mr. Boulez was by all accounts a gracious, soft-spoken and self-effacing gentleman, much beloved by the musicians he worked with. In his composition and his conducting — which he managed with the brisk efficiency of a bank teller giving change — he was the antithesis of the romanticized stereotype of egoistic, heaven-storming musician.

“Perhaps I can explain it best by an old Chinese story,” he said to his biographer, the late Joan Peyser. “A painter drew a landscape so beautifully that he entered the picture and disappeared. For me, that is the definition of a great work — a landscape painted so well that the artist disappears in it.”

How Pierre Boulez wound up in a Beach Boys cover band »