A lost violin concerto turns up in Canada

Librarians at the University of Toronto have found a concerto that has been deemed lost for more than a century.

The Norwegian Johan Halvorsen (1864-1935) composed it for the Canadian violinist Kathleen Parlow (1890-1963), who gave its premiere on August 14, 1909 in Scheveningen, Holland. She gave two more performances that year in Oslo, after which the score disappeared.

Henning Kraggerud will revive the work this summer at a musicologists’ convention in Stavanger, Norway. 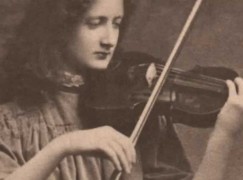