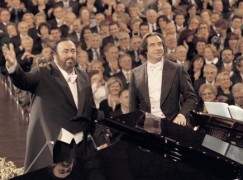 Like the Pope in St Peter’s Square, the maestro has given his annual interview blessing to Corriere della Sera.

In in, Riccardo Muti laments the decline of the essence of Italy, its savours, its habits and its music. He has a nice way of evoking an image:

The Alps separate the world of frost and suet from the sun and the  oil. Our blood circulates differently. And the essence of our spirit is melody. Pavarotti was the greatest of the past half-century not just for voice, but because he sang with a mixture of joy and sadness that is in our nature.

Unfortunately Italy today can no longer either suffer, or smile.

… I remember the first time I went to the Bellini (Theatre). It was 1966, and Catania was filled with the scent of orange blossoms; today you smell only kebab. I owe everything to Italy. In particular, I owe it all to the South.