The orchestra has published a 55-page scholarly investigation into its ‘ambivalent loyalties’ in the period from 1938 to 1970. During the union with Hitler’s Reich the orchestra was a willing collaborator with racial persecution and other crimes against humanity. That much is well documented. The post-War period is more hazy.

The orchestra’s chairman from 1938-45, and its most influential board member for the next quarter-century was the charming Wilhelm Jerger, an avowed Nazi and lifelong anti-Semite. Jerger proclaimed that the orchestra’s first loyalty was to itself. His exchanges with Nazi leaders are among the most revealing passages in the new research.

Jerger emerges as the force behind the 1960s decision to award the orchestra’s Ring of Honour to the Nazi war criminal Baldur von Schirach (pictured), the genocidal Gauleiter of Vienna. However,  the research team of Silvia Kargl and Friedemann Pestel, admits that there are gaps in the archive for 1966-68 and decide that the post-War actions and attitudes of the orchestra require extensive further investigation.

The new paper, funded by the Birgit Nilsson Award, is a stride in the right direction.

You can download it here (in German, bottom righthand column). 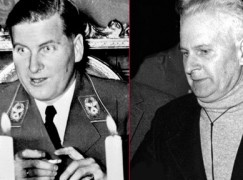