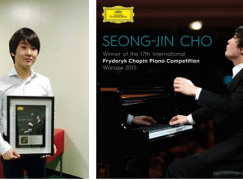 ‘Top-selling classical CD in a decade’

Chopin winner Seong-Jin Cho has just been awarded his sixth platinum disc for Korean sales of his debut DG album. It’s the top-selling classic in Korea for a decade, say DG, outstripping Sumi Jo’s Missing You.

More than 40 percent of buyers from one e-tailer said they had never bought classical music before.

« Just in: Nelsons cancels ‘a number of weeks’