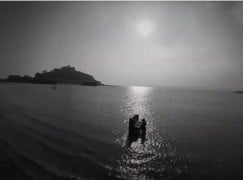 To kick-start my career, I put a piano in the sea

A Cornish teenager with a lovely voice and ambitions to be a singer-songwriter decided the best way to get started was to play a piano in the sea, in a shallow beauty spot at low tide, and call in a film crew.

According to local media: ‘A plea was sent out on Facebook by Diani to find an old piano for the film, luckily a lady from Newquay who had owned one for 45 years heard about the appeal and offered hers; although she was not told what it would actually be used for.’

All well and good, and we hope Diani, 17, gets the lift-off she seeks. But every time a musical instrument is abused by getting dumped on a beach, or thrown out of a window, or mishandled by an airline, the art of music gets devalued one more notch and the profession of musician becomes that much more tenuous.

There needs to be a society for the protection of unloved musical instruments.

« The only women composers to get heard are the living ones