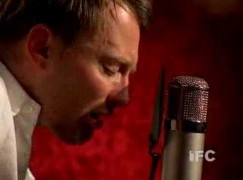 The Radiohead singer and songwriter has issued a blistering attack on Google-owned Youtube for conquering and occupying the territory, ‘like the Nazis did in the Second World War’.

Here’s what he tells La Reppublica:

‘People still say that this is an era where music is free, cinema is free. It’s not true. The service creators make money — Google, YouTube. A huge amount of money by trawling, as in the sea — they take everything there is….

‘”Oh, sorry, was that yours? Now it’s ours. No, no, we’re joking — it’s still yours”. They’ve seized control of it — it’s like what the Nazis did during the Second World War. Actually, it’s like what everyone was doing during the war, even the English — stealing the art of other countries. What difference is there?’

A misplaced simile, perhaps, but few would disagree with the underlying sentiment.