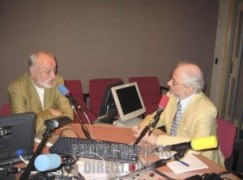 The death of the German conductor today at the age of 88 is a cause for global sadness.

Kurt was not widely loved until his mid-life. He seemed at first to be a rather rigid disciplinarian and unsmiling representative of the authoritarian East German regime. But those who grew close to him knew a different story and once he met his third wife, Tomoko, playing in a Brazilian orchestra, an altogether warmer man emerged.

I got to know him well in the early 1990s and we bonded over our mutual love for Klaus Tennstedt, whom Kurt had known and loved since he was 19. It was through Slipped Disc that Kurt announced to the world that he was suffering from Parkinson’s Disease and in an interview with me that he (with Tomoko’s support) discussed its intimate effects. His courage and humility in the face of mortal illness was humbling. He would stand in front of an orchestra, no longer able to raise an arm, and still communicate the inner essence of a Beethoven symphony.

He was a great musician and a fine human being. I cherish his memory.

Kurt Masur, born in Silesia, escaped from an American POW camp at the end of the war, made his name with the Leipzig Gewandhaus and his greater fame by defying the Communist regime in Leipzig and facilitating a peaceful transfer of power. Approached to become president of united Germany, Kurt said: ‘I’m a musician. That’s what I know how to do.’

From 1991 to 2002 he was music director of the New York Philharmonic, sharpening its playing responses and instilling a stronger sense of identity. He fell out publicly with its president Deborah Borda, but was later fondly reconciled. He went on to succeed Tennstedt at the LPO and to revitalise the Orchestre National de France.

Never remotely a Nazi, he was proud of his title as honorary guest conductor of the Israel Philharmonic.