Lulu – so good we went twice

Our New York operavores, Elizabeth Frayer and Shawn E Milnes, were so smitten by their first Lulu at the Met that they cleared diaries and emptied the piggybank to see it again.

Some elements only became apparent to them second time around.

Two lessons (everything about Lulu comes in two-Lus):

1 If the Met wants to grow the audience it must keep showing stuff that folk have never seen before.

2 Maybe the Met should hand out slips offering departing operagoers a return ticket to the same show at 50% off.

I found the character action easier to follow this time around.  I was a touch overwhelmed by Kentridge’s visuals at times in the first performance. This is not a criticism.  Great art should have many levels and invite multiple viewings.

Sadly there is only one performance of Lulu left in the run.  If you haven’t seen it, go.  If you’ve already seen it, go again.  I pray they revive this production in the coming years.  I think there is much left in it to be discovered. 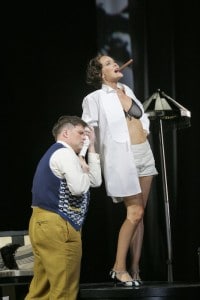