London gets a pop-up orchestra

On the corner of Leicester Square, in a refugee centre, a hospital, a prison, or between the trees in Battersea Park – you never know where to expect the Street Orchestra of London.

The Street Orchestra of London (SOL) is the latest project to be launched by Nonclassical, the contemporary classical club promoter and record label founded in 2004 by Gabriel Prokofiev. Modelled on Amsterdam’s Ricciotti Ensemble and formed in collaboration with Gijs Kramers, Ricciotti’s former conductor, SOL is a 40-piece scratch orchestra of players aged 18 and over, who will have spent several days rehearsing together before touring London’s community and public spaces, as well as some extraordinary locations. 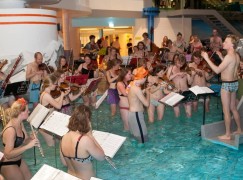 A SOL performance is based on the belief that every human has an equal right to enjoy live, quality music. It aims to break any barriers that exist between player and public – by performing up-close for communities who rarely have access to this art form, and thus bringing orchestral music to everyone, everywhere.

With a set up time of less than three minutes, SOL will perform four to seven performances per day over the course of four days, with the aim of captivating as wide an audience as possible through their performances of music from a wide range of times and styles, ranging from classical to jazz and bluegrass.

For the players, taking part in the orchestra will be a unique musical, social and creative experience. Nowhere else will musicians be offered the opportunity to perform, improvise, present, arrange and compose. SOL also gives an unequaled insight into many layers of everyday society and takes its players to places they may otherwise never see: prisons, hospitals, refugee centres, hospices, shelters for the homeless and old peoples’ homes, as well as more public places such as train stations and parks. Touring with SOL gives young musicians a broad view of the cultural landscape – a place where more and more players are likely to have their careers in the face of changing traditional performance values.

The players will not pay any fees to be part of the orchestra, unlike a normal university orchestra tour – they are part of the SOL family. Rehearsal space will be sought on an in-kind basis where possible, and larger performances in specific venues will pay performance fees. Additional funding will be sought from a variety of sources, including trusts and foundations, and individual donors.

SOL will launch on 13 January 2016, during Nonclassical’s Battle of the Bands and Monthly Club Night at The Victoria, Dalston, 451 Queensbridge Road, London E8 3AS