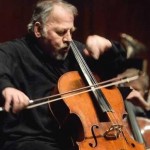 I have spent the past few days in Belgrade, playing Bruch’s Kol Nidrei and Tchaikovsky’s Rococo Variations with the (lovely) Belgrade Philharmonic under the baton of a great musical figure, Heinrich Schiff. Alas, Heinrich’s health is far from good, and he no longer plays the cello (although he still teaches); but he is an inspiring conductor – it was touching to see the orchestra giving him their all in Tchaikovsky’s 5th symphony. And for me, it was a very special experience to play with him for the first time, having known and admired him for so many years. I told him that, looking up at him onstage, he reminded me of Sandor Vegh (a younger, better-looking version, I hastened to add!) We spent quite a bit of time together; despite his health problems, his crystal intelligence and his unique sense of humour are unimpaired.

One story that he told me really struck home. I was complaining (as usual) about the pressures of performing the Bach suites. He looked at me, and said quietly: ‘Bach saved my life.’ I asked him what he meant; and he told me that a few years ago, he had a serious stroke, and was in danger of losing all mobility on his left side. As soon as he got to hospital, and realised what was happening, he started (almost instinctively, I imagine) to go through the fingerings of the Prelude to Bach’s first suite, moving his fingers ceaselessly to the imaginary music. He did this for about 20 hours a day, he thinks; and gradually his whole body came back to life, powered by those fingerings. It is an amazing story (and he said he was happy for it to be generally known).

Today you would never guess that he could have been half-paralyzed, possibly even incapable of speech – or worse. The miracle of Bach – and of Heinrich.

Heinrich Schiff died on December 23, 2016 in a Vienna hospital.