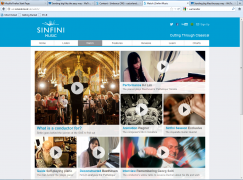 The classical music features site has told contributors it will cease commissioning new material from the end of this month. Past material will remain online, but we understand from sources within Universal that the site will migrate to Berlin in the New Year to become the English-language component of the Deutsch Grammophon site. The idea of an independent online classical magazine hosted by Universal quietly expired.

The brainchild of former Universal CEO Max Hole, Sinfini was intended to attract new classical consumers with a range of information, videos and reference material. The number of users, however, failed after five years to match company expectations while the costs proved ultimately unsustainable.

Sinfini’s finale will be greeted with delight and relief by Gramophone, which refused to accept its  advertisements, and by other classical magazines. But the loss of a classical editorial outlet will not add many readers to other sites. It merely diminishes the sector as a whole.

Declaration of interest: Norman Lebrecht contributed an Album of the Week to Sinfini from the time it opened.

London puts up £5.5 million for next stage of new concert hall »