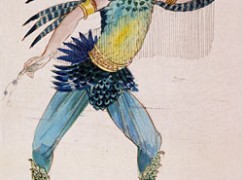 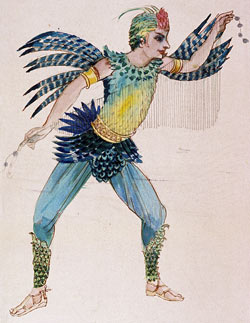 Papageno from The Magic Flute (1975), designed by Peter Rice

The distinguished stage and opera designer Peter Rice died on 24 December at the age of 87. Having first trained as a painter, his first opera production was in 1952, when he designed Seraglio for Sadler’s Wells, launching an astonishingly long and varied career during which he designed for operas, ballets, plays and musicals in the West End and more widely across Britain, in Europe, America, Australia and the Far East. Over nearly sixty years he worked with many of the greatest stage performers and directors: he was still working for Opera Holland Park (for whom he designed well over a dozen productions after 2000) when he was well into his eighties.

His work was always graceful and elegant, as was he – one of the most gentle, erudite, modest and generous of people. With a twinkle in his eye, and always a kind word for everyone, his sketch book and pencil were never far from his hand. His eye for detail was astonishing – walking down the street he would suddenly vanish into a little shop, emerging a few moments later with another piece of fabric or an object that he had spotted which would find its way into the current production. With an ability to create something vivid and memorable from almost nothing, he was the only production designer I have ever worked with who never once went over budget. He was one of the most creative people you could ever meet, and always a joy to work with. But much more than that, he was the one of the warmest and kindest people you could ever hope to encounter.

« How to steal a song