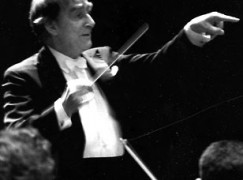 Death of an eminent conducting professor

Thomas Baldner, who has died aged 87, conducted leading orchestras in London and Berlin before joining the faculty of the Indiana University School of Music, where he taught until 2008.

A Hitler refugee, he founded the Greenwich Philharmonia in Connecticut and was artistic director of the Rheinisches Kammerorchester in 1950s Cologne, working with Stockhausen and Boulez on the newest of the new.

It is with sadness that I share the news of the death of Thomas Baldner. Thomas died on Sunday, December 27, 2015.

Thomas was born into a musical family. He began the study of music with his father, the famous German cellist Max Baldner, in his hometown of Berlin, and later was a student at the Berlin Academy of Music. As the first student from Germany in the postwar period, Thomas attended Indiana University between 1949 and 1952, subsequently receiving a bachelor’s and master’s degree in music. He was a master student of Pierre Monteux and was founder and conductor of the Greenwich Philharmonia in Greenwich Connecticut. Thomas returned to Europe, and for the next 25 years conducted orchestras from Berlin to Buenos Aires and from London to Tehran.

In 1976, Thomas was invited by Dean Charles Webb to join the faculty of the Indiana University School of Music, where he taught until his retirement in 2008. He conducted many orchestral and opera performances including tours of the School of Music ensembles in New York City. He was a conductor, pedagogue and master teacher to hundreds of aspiring conducting students, and his former students occupy major positions as music directors and conductors.

Thomas is survived by wife Bettina Baldner, daughter Karen Baldner  and his son Oliver (wife Elizabeth). We do not have any information on services to share at this time, but will be in touch if something is planned.

« Can you play the violin while surfing a big wave?