Death of a path-breaking American soprano

The death has been announced of Mattiwilda Dobbs, the first African-American to sing at La Scala and (though we can’t be sure) at Glyndebourne. Mattiwilda, who was 90, had been living the last two years in a retirement centre in her birthplace of Atlanta, Georgia.

Blessed with a light coloratura voice, she studied with Lotte Leonard in New York and Piere Bernac in Geneva, making her stage debut in Holland in 1952. The following year she sang Zerbinetta in Ariadne auf Naxos at Glyndebourne and Elvira in L’Italiana in Algeri at La Scala.

She made her Met debut as Gilda in 1956 and was the first Afro-American singer to be offered a long-term contract at the house. Refusing to sing before segregated audiences, she did not appear in her home town until 1962. She lived in Spain with her first husband, in Sweden with the second. Mattiwilda retired from the stage in 1974. 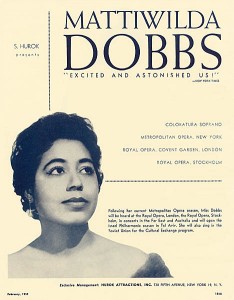 She made few recordings, but good. 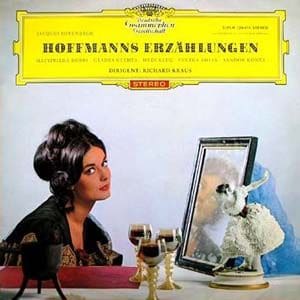 Extract:  When I first started, speaking of a career, there weren’t too many opportunities for black singers in opera.  There was nobody at the Met, and there were one or two at the New York City Opera.  Camilla Williams and Lawrence Winters and Todd Duncan had sung there, but to think of making a career in opera, really there weren’t many chances in those days.  I was very interested in the recital because my teacher had been a recitalist in Germany, and the focus of my training was for that.  Also I had heard great singers singing recitals, and I liked that very much.  So I really thought that was what I was going to be.  But I tell you another thing… it used to be that you could just be a recital singer and not do opera.  But now it’s impossible to be a concert singer without going through opera.  That’s been that way for some time.  Thank heavens that in those days you could make a living as a concert singer.  You can’t hardly do that now, but in those days we had Dorothy Maynor, Marian Anderson, Roland Hayes and Paul Robeson.  They all sang recitals.  But things are much better.  There are so many black opera singers now that I don’t know them all.