After 40 years on the CSO Members Committee, bass player Roger Cline will not run for re-election.

His daughter Jenny Mondie, plays viola in the National Symphony Orchestra and chairs its committee. Jenny writes a vivid reminiscence in the CSO players’ journal, Backstage with Chicago Symphony Musicians (not available online). Here’s a sample:

I was not quite a year old when Dad won the CSO bass audition in 1973. There are stories about him putting me in my infant seat on the dining room table and practicing excerpts at me before that audition. Mom, Dad, and I moved to the north suburbs of Chicago that September and straight into a four-week lockout. While it was an immense honor and very exciting for Dad to have this new prestigious position (he was previously in the West Point band playing sousaphone), the lockout must have been quite a strain for a young family. My Dad is very logical and likes finding creative solutions to problems, so it was probably inevitable that he would be drawn to serving on the Members’ Committee, but the experience of joining an orchestra during a labor stoppage probably sealed his fate.

Jenny writes of her experiences at the NSO:

Once after a meeting, I was criticized by one of my Committee colleagues as being too dour towards our management. Distraught, I called Dad. His response was “If there isn’t someone scowling on your side of the table, how will they know you’re really paying attention?” 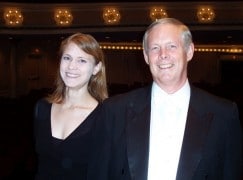