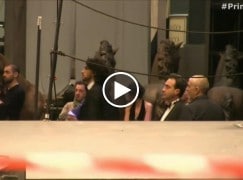 At the opening night of La Scala, during curtain calls for a successful Giovanna d’Arco, passions erupted backstage and were heard all over Italy on Rai radio and worldwide on live streaming.

The director Moshe Leiser was clearly heard shouting ‘asshole’ at someone, evidently at Riccardo Chailly, the music director, with whom he had a difficult relationship. He followed up with an Italian epithet that sounds like ‘piece of shit’.

The outburst was shown live on Rai Radio3 and on La Scala streaming, both waiting backstage for comments from the artists after the triumphant conclusion of Verdi’s long-neglected opera.

You can watch the outburst here.

These things happen. In the past, they would not have passed unnoticed. But with live streaming and global access on social media they can get inflated. La Scala is, we hear, considering how to handle backstage access in future.

« Death of a path-breaking American soprano

Why the panic over ENO? We name the source »