The audience at the Opéra de Paris did not wait for the final curtain last night. They booed the Latvian director Alvis Hermanis at the interval curtain, apparently – or partly – in protest at ugly remarks he had made about the reception of Syrian refugees in Europe.

Faust is reconceived as a kind of Stephen Hawking figure out to conquer Mars. 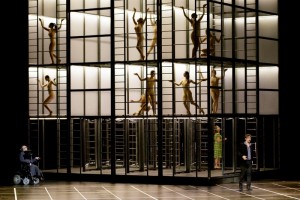 The next Hermanis production is Il due Foscari in February at La Scala.