A much-loved Times critic has died

Tributes are coming in for Rodney Milnes, chief opera critic of the London Times from 1992 to 2002. Rodney died last night in Gloucestershire after a long illness at the age of 79.

In addition to his duties for the Times, Rodney was editor and part-owner of Opera magazine. A shy, private man, astute and with a gentle sense of humour he was universally liked and respected by his fellow-critics.

When he retired from the Times, feeling he still had much to give, I tried over a drink to hire him for the Evening Standard, of which I was assistant editor. Rodney couldn’t say no. Nor did he want to say yes. So we had a couple of drinks and left it at that, never mentioning the matter again except with the faintest of twinkles in his eye. 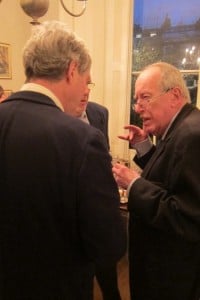 Rupert Christiansen wrote: ‘Very sad to learn of the death of Rodney Milnes – a great critic & a kind man, who did much to help me in the early stages of my career.’

Mezzo-soprano Alice Coote: ‘Witty,elegant,sensitive,honest truthful. Glad I grew up reading his words & what was possible.’

Rodney was an ultra-fastidious, thoroughly decent man, dedicated to his art and his craft. In recent years, he withdrew to Gloucestershire to live close to his sister, who died earlier this year.

Rodney’s passing marks the last of his London generation, following the deaths in the past 12 months of Michael Kennedy, Andrew Porter and Edward Greenfield.