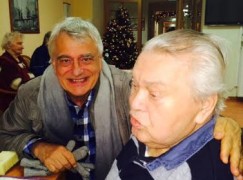 Aside from East Berlin and Washington D.C., the late Heinz Fricke, who died this week, was also music director at Norwegian Opera from 1984 to 1990. His concertmaster Ole Bohn, now professor at the Sydney Conservatorium, has fond memories.

Maestro Fricke was a master of sound and phrasing and could, with tiny gestures and looks, obtain what he wanted. Where other conductors need to explain what they wish, Heinz Fricke managed to show what he wanted without words. He always let the musicians play without interference and let the singers breathe to display their voices.

In Norway Mr Fricke made an enormous impact. He conducted the major Mozart and Verdi operas as well as Boris Godunov and Carmen. His interpretations of Strauss and Wagner operas were outstanding and he was responsible for the artistic growth of the Norwegian Opera. Most performances were with singers from the house ensemble.

Maestro Fricke gave me as concertmaster great responsibility and freedom . He helped me form the sound of the strings and let me also lead without coming in between. I learnt a lot from him. Sayings like ‘never jump too fast to the downbeat’ and when there are many fast notes ‘always play them out’, or rather in German: ‘Ole, ausspielen’ are still in my ear and I try to pass them on to future generations. He was a true bearer of an almost lost German Kapellmeister tradition. In addition he was the musicians’ best friend.

Valery Gergiev: Putin has declared 2016 to be Prokofiev Year »