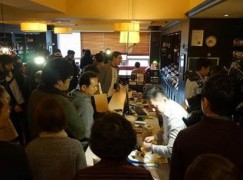 He has shifted 65,000 copies of his DG debut in the first two weeks of release and is presently ahead of Andrea Bocelli in the US sales charts.

The Chopin competition winner Seong-Jin Cho is sweeping all before him.

His album has yet to be released in Japan, where he won the Hamamatsu competition, or in France, where he lives.

A violinist, slain in the Paris massacre »