Who says classical music has to be ‘relevant’?

Jed Gaylin music director of Bay Atlantic Symphony, has a fresh take on many aspects of the issue, including the pre-concert talk:

George Szell was fond of telling a joke about how everyone, when they die, ascends a staircase with a sign “to heaven,” except Americans. We all go up a stairway with a sign “to a lecture on heaven.”

But why must the lecture be so removed from the joys and explorations of the concert experience? Why can’t the conversation on heaven (the concert) contain some of the heavenly aroma? Why should there be separate staircases? Stravinsky has an apt line about how we have all been taught to appreciate music too much, and to love it too little.

To me, relevance is a quality, like innocence. Some works have it, some performances have it. As a performer, I cannot make music relevant any more than a defense lawyer can make the client innocent. I can work to uncover what is so singular, “in-relief” about a work, for me, at that moment. If my artistic sensibilities and capabilities are hot and firing smoothly, it will be relevant. I can commission works from composers whose music I believe is vital, and who aware of our current musical milieu. But it is for a composer to write something that is relevant—and perhaps even timeless. 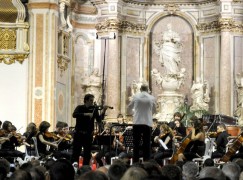