Week’s top video: ‘From nine years old, I wanted to be a curator’

One of the British Museum’s hidden treasures. You won’t want to miss this. 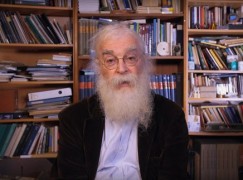