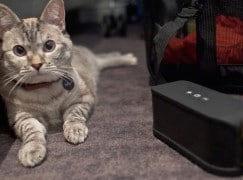 David Teie, a cellist in the National Symphony Orchestra, creates music specially for cats. It’s based, he says, on scientific research into how to make pussies happy.

Unlike humans, says David, ‘felines establish their sense of music outside of the womb, through sounds heard after they’re born, like the chirping of birds, the sucking of milk, or the purring of their mother. Using only musical instruments, I incorporated those sounds and their natural vocalizations into music and matched it to the frequency range they use to communicate. The reason harp plays notes play in rapid succession (23 per second!) is because that’s the precise rate of a cat’s purr.’

So David decided to go global with a Kickstarter appeal for funds to record and promote music that cats will just love. He has passed his $200,000 target with three days to spare.

« Death of an audio (and violin) legend