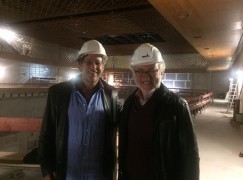 In the new issue of Standpoint, out today, I write about what’s happening in Bochum, a profoundly depressed town in Germany’s Ruhr region that has lost its steel, coal and lately its car industry.

So Bochum is building a new concert hall, right?

Bochum, nearly bankrupt, has grasped music as a means of salvation. (Steven) Sloane, the orchestra’s executive director as well as its chief conductor, persuaded the town to let him build a new concert hall and then called on its citizens to help. Out of a budget of €35 million, half has been donated by individuals, in gifts from €5 upwards.

The hall is being constructed around a mid-19th-century church, its deconsecrated nave offering a long corridor of light in ambient gloom. Every gifted euro cent, every inch of space, is being made to count. Teaching and rehearsal studios occupy the peripheral rooms. When it opens next summer, there will be music in the hall from morning to night, all year round. The contrast with Simon Rattle’s half-baked plan for a half-billion pound vanity hall in the City of London could hardly be more pronounced. As London looks to its bankers, Bochum looks to its bootstraps. No question which has a better understanding of the value of music in an age of uncertainty.