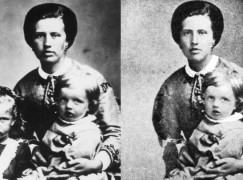 The sister who was airbrushed out of Sibelius’s life

A major story in the Helsingin Sanomat today. 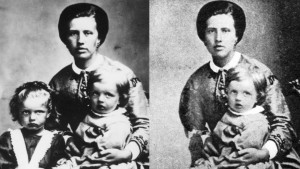 When Sibelius turned 50, a hundred years ago, the Finnish media printed  a picture of the great man with his mother (right).

But they cropped his sister, Linda, out of the original shot (left).

Linda was the family secret. Brother Christian became an eminent psychiatrist, head of Helsinki’s mental hospital. As teenagers, the siblings played in a trio.

Linda got religious and went to Tunisia as a missionary. She came home showing signs of mental instability. Christian locked her up in his hospital, where she died in an isolation cell in 1932. Jean Sibelius once said: ‘I see my future destiny in her’. He was terrified of going mad.

Vesa Siren, Sibelius’s most recent biographer, adds: Important article. Linda Sibelius was well enough to visit Christian’s and composer’s homes from time to time so the isolation was not complete. Composer, his wife and daughters also wrote letters to aunt Linda, who often responded.

She was mentioned in early articles and biographies, also by composer himself, though the mentioning of illness could have been impolite when she was alive and able to keep correspondence and leave hospital from time to time. Linda is also not brushed off from, say, photograph in Ekman’s biograpy (1935), and her illness was, of course, mentioned already by Tawaststjerna.

« The cello star who likes to play tutti