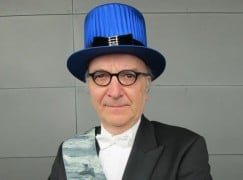 The Dutch organist, composer and conductor Jacques van Oortmerssen has died at the age of 65.

Widely esteemed, he performed and taught at major festivals around the world, including the BBC Proms. Like his predecessor, he recorded the organ works of J S Bach, but saw only nine volumes released. He lived to complete a recorded edition of the works of C P E Bach and Johannes Brahms.

Despite a somewhat forbidding demeanour, he could take a joke.