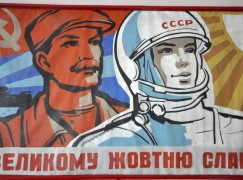 The long weekend read: Welcome back to the Soviet Union

Anne Applebaum, the US-Polish political analyst, has written a scorching piece in Commentary on the return of Soviet values, practices, apologists, nostalgists and fellow-travellers. Here’s a sample:

Somewhat less amusing is the resurrection of old Marxists like Jeremy Corbyn, the newly elected leader of the British Labour party. For many years Corbyn has been writing for the Morning Star, the newspaper of the British far left, proffering anti-American, anti-NATO, anti-Semitic, and even anti-British sentiments. These views no longer alarm a generation that can’t remember who sponsored such views in the past, or why. His conservative opponents have accused him of pushing policies that were last heard in the 1980s, but what does that mean to people who were born in the 1980s? To them Corbyn sounds new and fresh.

Still, the resurrection of the Western far left or the return of forgotten British comrades is not what I worry about the most. My concern is the revival, with amazing speed, of a belligerent Russian state, one led by men who were taught and trained by the Soviet state and are thus prepared to use a familiar blend of terror, deception, and military force to stay in power. One might argue, of course, that such men never really went away. But their level of aggression is rising just as our once formidable ability to counter them seems to have vanished altogether. Instead, we have trouble simply recognizing them for what they are.

Here’s how US baggage handlers load your instrument… »