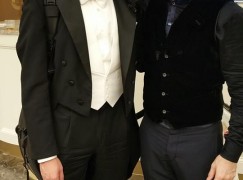 The cello star who likes to play tutti

I once met the widow of an amateur violinist who, as he began to play the overture at a festival concert, saw another violinist slip into the vacant seat beside him and start playing from his score.

He nearly fell off his chair when he recognised his stand partner. It was Fritz Kreisler, and he was down to play the next piece – the world premiere, if I’m not mistaken, of Vaughan Williams’ The Lark Ascending. ‘Don’t mind me,’ whispered Kreisler. ‘I hate being stuck alone in green room.’

(We all know that feeling.)

Alban Gerhardt was down to play the Dvorak cello concerto in the second half, after the Louisiana Philharmonic got through Sibelius’ Lemminkäinen Suite.

As the concert began, Alban took up a chair in the back of the celli beside LPO cellist Jeanne Jaubert, who happened to be sitting alone. Second half, he played a great Dvorak.

« Steve Jobs: ‘I play the orchestra’

The sister who was airbrushed out of Sibelius’s life »