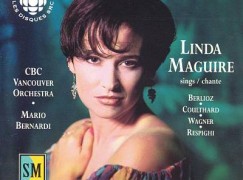 The American opera singer who became a neuroscientist

She has recorded for DG, sang Ermione at Glyndebourne and performed many times at the Kennedy Center.

But Linda Maguire was also training as a neuroscientist. She had just published a paper on how ‘Participation in active singing leads to cognitive improvements in individuals with dementia’.

In an interview with ET she says:

‘I’m a performer, that’s how I come to this work. Performance is the greatest teacher and my job was to hold audiences on the tip of my little finger from 45 minutes to three hour operas. I know how to control an audience, but I was just dumbfounded that the Alzheimer’s patients all stopped. And I barely did anything.

It got me very interested in the power of music in dementia patients, and within in 10 years I had a master’s degree in neuroscience. I realized that the brain was responding to music. I learned how you could wield music as a precision tool to change and transform different parts of the brain.’

Week’s top video: ‘From nine years old, I wanted to be a curator’ »