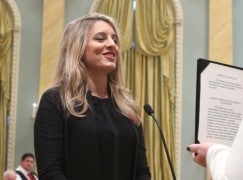 PM to Culture Minister: This is your job. Now do it.

As part of Canada’s new open government policy, prime minister Justin Trudeau has published letters to each of his ministers specifying what he expects from them over the next four years.

Here’s what the Minister of Canadian Heritage Mélanie Joly has been ordered to deliver:

I am honoured that you have agreed to serve Canadians as Minister of Canadian Heritage.

We have promised Canadians a government that will bring real change – in both what we do and how we do it….

As Minister of Canadian Heritage, your overarching goal will be to implement our government’s plan to strengthen our cultural and creative industries. Our cultural sector is an enormous source of strength to the Canadian economy. Canada’s stories, shaped by our immense diversity, deserve to be celebrated and shared with the world. Our plan will protect our important national institutions, safeguard our official languages, promote the industries that reflect our unique identity as Canadians, and provide jobs and economic opportunities in our cultural and creative sectors.

In particular, I will expect you to work with your colleagues and through established legislative, regulatory, and Cabinet processes to deliver on your top priorities:

Restore and increase funding for CBC/Radio-Canada, following consultation with the broadcaster and the Canadian cultural community.

Review the process by which members are appointed to the CBC/Radio-Canada Board of Directors, to ensure merit-based and independent appointments.< Double investment in the Canada Council for the Arts.

Increase funding for Telefilm Canada and the National Film Board.

Increase funding for the Young Canada Works program to help prepare the next generation of Canadians working in the heritage sector.

Establish a free, online service for learning and retaining English and French as second languages.

Work with the President of the Treasury Board to ensure that all federal services are delivered in full compliance with the Official Languages Act.

Work in collaboration with the Minister of Indigenous and Northern Affairs to provide new funding to promote, preserve and enhance Indigenous languages and cultures.

Work with the Minister of Justice to update and reinstate a Court Challenges Program….

I know I can count on you to fulfill the important responsibilities entrusted in you. In turn, please know that you can count on me to support you every day in your role as Minister.

I am deeply grateful to have this opportunity to serve with you as we build an even greater country. Together, we will work tirelessly to honour the trust Canadians have given us.

« Theft alert: A golden flute is stolen in Vienna