Musician, 74, is cleared after 3 years of sex abuse charges

Roy Harper, a guitarist and songwriter who has worked with Paul McCartney, Led Zeppelin and Kate Bush, has seen all charges against him dropped by prosecutors at the start of a retrial today.

Harper, 74, has always proclaimed his innocence.

He said today: ‘The psychological and personal cost to my wife and myself has been enormous and the financial cost hugely unfair. I lost my livelihood and I spent my savings … and more, on my defence.’ 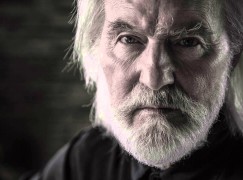