Musical firsts: A woman principal in a US orchestra

From the Chicago Symphony archives:

In 1941, Frederick Stock appointed Helen Kotas to the position of principal horn, making her the first woman to hold a rostered position in the Chicago Symphony Orchestra. She was the first female to secure such a position—in fact, the first woman to be hired as principal of any section, except harp—in a major U.S. orchestra.” 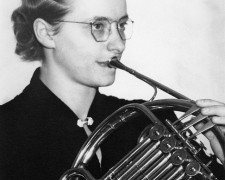 (Kotas would serve as principal until 1947, when Philip Farkas returned to the orchestra (from a spell in Cleveland). She moved to third chair for one season and left in 1948; she married University of Chicago pathologist Edwin Hirsch the following year.)