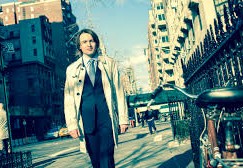 Just in: Star pianist joins board of the New York Philharmonic

It has been announced that Daniil Trifonov, winner of the last-but-one Tchaikovsky Competition, has become a director of the New York Philarmonic.

The rest of the board represent big money. Daniil has all the notes. And a raincoat.

Pianist Daniil Trifonov, the 24-year-old Russian pianist who is beginning his final week as the spotlighted soloist in the three-week Rachmaninoff: A Philharmonic Festival, has joined the Board of Directors of the New York Philharmonic, elected on November 13, 2015.

“Daniil Trifonov will be an outstanding addition to the New York Philharmonic Board of Directors,” said Chairman Oscar S. Schafer. “He is a brilliant pianist who, since his debut in 2012, has thrilled our audiences and established a strong rapport with our musicians that critics and audiences have noticed. His insights as a young musician who travels the world will bring an immensely valuable perspective to the Board at a time of growth and expansion for the Orchestra.” Daniil Trifonov joins Joshua Bell, Yefim Bronfman, and Itzhak Perlman as musicians on the Board with whom the New York Philharmonic has closely collaborated.