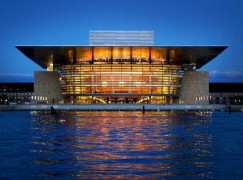 International conductors have spoken out against cost-saving measures at the Royal Orchestra in Copenhagen that have led to job losses and cancelled auditions. The Danish Government is trying to claw back its investment in a vanity-project theatre (below) that many think should never have been built.

The French conductor Bertrand de Billy said that, after the Paris terrorist attacks, this was not the time to cut art. ‘The most valuable thing Europe has is its cultural diversity, and the Royal Orchestra is one of the greatest treasures that Denmark has to offer in this area,’ he said.

German conductor Hartmut Haenchen said that trimming the orchestra would start a vicious circle that would only lead to further cuts.

Mikhail Jurowski, former chief conductor of Cologne Radio Symphony Orchestra, said the sound of the orchestra, ‘one of the best in the world’, would be diminished.

Beczala’s not looking any younger »