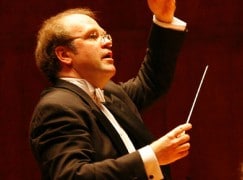 We are delighted to report that Bernard Labadie, music director of Les Violons du Roy, will make his return to action next month in Handel’s Messiah with St Louis and the Chicago Symphony orchestras after an 18-month battle with cancer.

Labadie, 52, tells the CSO site he’s lucky to be alive. ‘Almost against all odds, it did work out,’ he said.

A week after his 2014 concerts with the CSO, the French-Canadian maestro fell ill in Germany and was diagnosed with T-cell lymphoma — a kind of blood cancer. He was in the hospital there for a month before returning to his hometown, Québec City, for what became a grueling medical odyssey.  He began with the usual treatment for this disease, a transplant of his own blood-forming stem cells, but this approach did not work. So he required a more complicated and more dangerous stem-cell transplant from someone else; one of his three siblings — a sister — proved to be a compatible donor.

The procedure took place in October 2014, but things did not go well. “Basically, I got every complication that is possible and then some,” Labadie said. Along the way, he had to be placed in an induced coma for a month, and when he was finally awakened, he faced severe muscle loss. “So when I woke up, I couldn’t hold a glass of water,” he said. “I couldn’t turn in my bed. Of course, I couldn’t stand by my bed or get up.” Thus he began an arduous rehabilitation. Labadie finally left the hospital in April, and he has continued a range of physical therapy and physical training since. “But things are going well,” he said. “It’s just a very long process.”

Death of an audio (and violin) legend »